ArcoFlex Sensei introduces a brand new concept to the IOT market: virtual sensors. Not possible on LoRA or single device gateway solutions, Sensei can combine one or more real sensors into virtual sensors to represent real data or conditions that are dependent on multiple real world inputs. 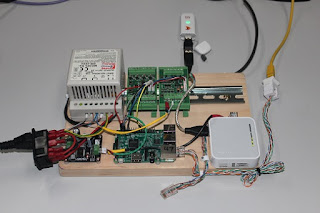 What a virtual sensor solves is important. Taking the example of a bio-security airlock, there are two doors with door switches and the airlock is in breach if both doors are opened simultaneously. Without virtual sensors you are constrained to writing code in the visualisation layer or stream analytics layer which constantly monitors the outputs of two sensors, the two door switches. Not only do you have to customise the code each time you need this implementation, the processing workload is now on the server side and scaling is a problem. If 1000 nurseries need an airlock, the server has to continually monitor this process for a 1000 sites. It is a massive performance hit and an unwanted complexity.
Enter ArcoFlex Sensei and a virtual sensor. The Raspberry PI code will create a sensor from the combined input of both door switches and report breach data like any other sensor. This is a simple Logical AND where both doors open creates a breach and even the length of time in breach can be measured in the visualisation. All processing is done on the remote PI so now scaling is not a problem. The dashboard merely displays data as if it were another sensor.
The key to sensor and device performance is in making the 1000’s of PI’s do the processing rather than the visualisation layer or the server. The resulting data stream becomes raw data just like any other data stream. This also allows for universal coding in the visualisation layer because the output is treated just like any other sensor.
So far, we have come across several very useful implementations:


·       Hothouse Airlock – At the Toolangi Seed Potato farm, bio-isolation is required in order to obtain certification to sell into Queensland. Whilst the doors can be rigged with alarms locally, Sensei records breaches (or lack of) and provides documentation for compliance purposes.
·       Filter Differential – in our standard irrigation monitoring solution there is a pressure sensor either side of the micro-filter. A virtual sensor is created to monitor the difference in pressure across the filter. Once it gets too great, a new filter is ordered and a replacement scheduled. Again, proactive alerts are generated to warn of pressure deterioration.
·       Irrigation line Leaks – when the line is pumping, there is a certain back pressure that is normal. If the outward leg pressure drops too much when the pump is running, there is a leak that must be attended to.
·        Pump Run Confirm – the float switch for refill can be actuated but if the UV sterilizer breaks, the pump is disconnected. This means that the float switch alone isn’t enough of an indicator that the pump is actually running. This virtual sensor might check three inputs to determine if it is actually running.
·        Fungal Growth Profile – there is a relationship between humidity and temperature that creates conditions ideal for fungal growth in a hothouse. The formula for this relationship can be coded into the PI so that raw data can be fed to the customer as a percentage of ideal.
·       Heartbeat – based around a simple timer, a single byte can be sent through to the dashboard confirming that comms and data channels are all in order. This is critical where you have data which of its nature, changes only very slowly or not at all for long periods. The heartbeat allows you to very economically detect the overall health of your sensor array.
·       Trending Patterns – perhaps you are monitoring air pressure or temperature and you have a need for a dashboard gauge which simply shows rising/steady/falling or drier/wetter and so on. Quite often, this fact is a metric of itself or can be used to combine into alerts and notifications. Defining these at the PI level solves all those scaling issues mentioned and ensures the output is recorded as data points of themselves.

With ArcoFlex Sensei, you can build virtual sensors to represent quite complex relationships between other sensors. These virtual sensors generate real time data in their own right but keep all the processing down at the sensor gateway. This makes for fully scalable business logic solutions to generate compound data without processing overheads.


But there is one other use for virtual sensors: output! Being able to control digital or analogue output is a vital part of remote monitoring and control. This isn’t just internal feedback, important as that can be, this is configurable control. Implemented with simple relays, a digital output could be instructed to turn on or off a motor, a fan, a compressor, a pump or in fact anything that can take a switched power supply. With a little bit of extra wiring we can also make an analogue output (something like 0V to 5V) to control a potentiometer. An example of this might be a thermostat or a stepping motor.
The virtual sensor gives us a structured way to provide configurable metrics to a digital or analogue input. Expect this to be the growth zone for IoT going forward. Well, once they’ve solved all the other issue first.
Geoff Schaller@ArcoflexIOT